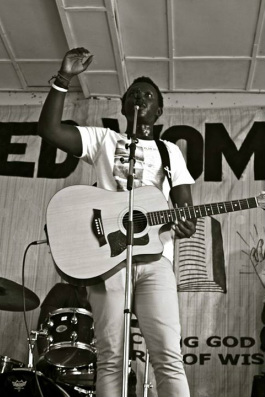 In the aftermath of the 1994 Rwandan genocide, Olivier Kavutse was left without parents.  Subsequently raised in his half-brother’s home, he suffered from neglect and was denied the privileges other children enjoyed. As a result, in his teenage years, he chose to rebel, following his peers into drug and alcohol abuse. This path led him to face only further rejection from his family and friends.

In February of 2003, he encountered Jesus in a high school fellowship and decided to become a Christian.  Soon after, Olivier discovered that he had a gift in song writing.  The art form became therapeutic, giving him a means to release the anger and bitterness he harboured in light of everything that had happened to him. In this process of healing, God entrusted him with a vision of writing songs that would encourage others who had endured similar experiences.

His songs quickly took off.  They could be heard on the radio, in schools and in churches across the country.  From there, his vision grew.  He began writing songs not only for the nation, but for the region, with his vision eventually expanding to the farthest reaches of the world.   The impact God made in his life during his teenage years left Olivier with a special affection for youth and young adults.

Today, Olivier Kavutse is the founder of the not-for-profit organisation Beauty For Ashes Rwanda and the Prayer House, which have a shared mission to release a generation to lead full and productive lives.

Learn more about OUR VISION and OUR PROJECTS.